The dearest ones of time, the strongest friends of the soul- BOOKS. ~Emily Dickinson 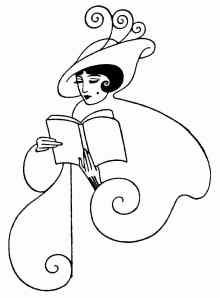 We read frequently, if unknowingly, in quest of a mind more original than our own. ~Harold Bloom

The greatest pleasures of reading consist in re-reading. ~Vernon Lee

Just the knowledge that a good book is awaiting me at the end of a long day makes that day happier. ~Kathleen Norris

Letter writing is the only device for combining solitude with good company. ~Lord Byron

The artist doesn’t see things as they are, but as he is. ~Anonymous

I came across this passage and thought it was beautiful. It points out a reason why human life is sacred- in the young, the elderly, and those disabled to such a degree that the world would declare them useless.

“Was she really as useless as Marianne thought her, wondered Marguerite this morning? She thought that she was not. She knew that in the eyes of the world her life must seem a very trivial thing, just a passing of the time somehow by a woman whose first youth had passed away without her having been able to lay hands upon the blessed employment that the care of husband and children would have given her, but she knew also that what the world sees of the life of any human creature is not the real life; that life is lived in secret, a reality that moves behind the facade of appearance, like wind behind a painted curtain; only an occasional ripple of the surface, a smile, a sudden light or shadow passing on a face, surprising by its unexpectedness, gives news of something quite other than what is seen. And Marguerite believed that her real life was of value, besides being an immense hoy to herself. She assured herself that the practice of the presence of God, that she had learned with self-discipline of thought and will, was not a selfish thing but something absolutely essential if one’s soul was to be of the slightest use. This faith had come to her from the book Reverend Mother had given her on the faraway day of her childhood, that she had picked up and for the first time read with attention soon after William had left the Island, a book of letters written by a barefoot Carmelite brother nearly two centuries ago. Like Brother Lawrence, she had learned by bitter experience that “useless thoughts spoil all”; she had learned to silence the chatter of self, to focus her mind in meditation, until the beauty dwelt upon became not a picture but an opening door.”

“The practice of the presence of God”…is this another way to say “pray without ceasing”? 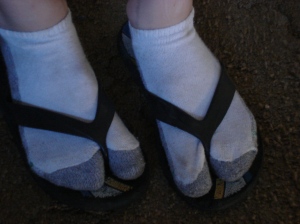 As Caleb demonstrates, just because they aren’t tabi socks doesn’t mean they can’t be worn in the Japanese way.

There’s nothing more fun than having a nice, sisterly conversation.

Heidi: Well, sew yourself together! *accompanied by head shaking, etc*

I burst into laughter and so Heidi had to chuckle, too. She keeps me from being too dramatic. In some ways, she’s my Eleanor and I’m Marianne.

It’s amazing how much more motivated you feel when you don’t have to listen to a motivational speaker. 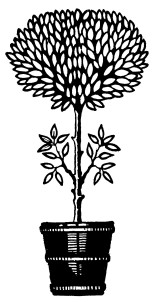 Almost like the good feeling you get when a class is unexpectedly canceled.

I didn’t realize that I missed the junior high until I was back on campus, talking to people I haven’t seen in eight weeks. As far as schools go, it’s a fantastic place to work. The buildings I use regularly are new or remodeled and there are plenty of supplies and space for people to spread out and get the work done. For the first time in three years, I know exactly where to show up, who I’ll be working with, and in general, what the year will be like. It’s great to finally know where my place is and feel like an insider, instead of figuring how to relate to yet another staff. For two weeks, at least.

On Aug 20th I have an interview for substitute teacher with the district. I’m not sure why the interview wasn’t scheduled before the beginning of the school year so that I could attend the substitute orientation and avoid leaving the TA job only a few weeks into the school year. However, so long as I have an interview, I’m happy. And I guess a few more weeks with the girl I’m with will provide some continuity for her. I was with her for 6th and 7th grade and as late as the beginning of July, expected to finish 8th, as well. This job change is mostly for the sake of the teaching credential program which will require half-day student teaching by January and full-day student teaching in March or April. What most people hope is that they can get a long-term sub position during student teaching so that “work” counts as “student teaching”.