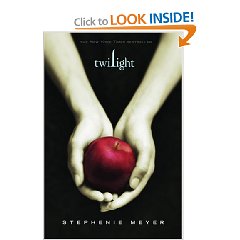 Most of the female lifeguards at the pool were reading the Twilight series this summer. The book covers were appealing but I did not read them because they were modern books about vampires and that seems like a good reason to be cautious. I forgot all about the Twilight mania until the day I got really irritated with the Facebook flair application.

Almost every piece of flair was swooning over this Edward Cullen guy and somebody Black. “Who cares?!? And who are these people??” I thought they were actors or something. Mostly, I was just irritated that the flair had turned into mindless drivel about people I did not even recognize. (You might protest that flair was always mindless drivel, even prior to the Cullen/Black invasion, but that is not so. There are some gems of intellectual genius on flair. You just have to look.) Oh, and every piece of flair said the same thing: “I heart Edward Cullen” or “Edward Cullen is way better than whoever-it-is Black”.

Finally, I figured out that these Cullen and Black characters are from the Twilight series. I also learned that nearly every teenage girl (and many a lot older) are practically drooling over the books. And a movie based on the first book in the series was just released. Apparently you either love the books or can’t stand them.

If you love the books, have fun getting offended by reading I want to beat Edward Cullen with a stick. If you can’t stand the books you’ll have even more fun. Did you know that “Bella is Rendered Speechless by Edward’s Beauty or Touch 17 times?”